On May 9th, 2012, the AESKU.DIANGOSTICS´ “Aesku.Award for a Lifetime Contribution to Autoimmunity” was awarded for the fifth time during the opening ceremony of the “8th International Congress on Autoimmunity”, which took place in Granada, Spain from May 9th to May 13th, 2012.

The award was presented by the Scientific Committee Chairperson M. Eric Gershwin, MD, from the University of California at Davis, US, one of the leading experts in Autoimmunity, Congress Co-Chairpersons Angela Tincani, Ricard Cervera, Carlos Vasconcelos, as well as Torsten Matthias the Founder and President of AESKU.DIAGNOSTICS.

Dr. Torsten Matthias explained in his introduction that a 700 year plus tradition of medicine can be found in Granada. He also stated that it’s not the building, but the people who work there as doctors, nurses and scientists who are both responsible for and passionate about their patients.

In Granada, this congress was again a platform to bring people together, share their knowledge to enhance support to patients and improve their quality of life.The study of autoimmune diseases and their acceptance within the medical community and in the general public has changed beyond all recognition and the quality and number of available diagnostics and therapies has continued to improve. This is also reflected in the ever increasing number of participants at this meeting, from 200 in Israel 12 years ago, to 2000 participants in Granada.

As on previous occasions, the Aesku.Award was awarded to three known researchers, who have distinguished themselves by year-long research in autoimmunity: Pierre Youinou, MD, DSc, from France, Allan Wiik, MD, Dr. Sci. Med from Denmark and Donna Jackson Nakazawa from the United States. 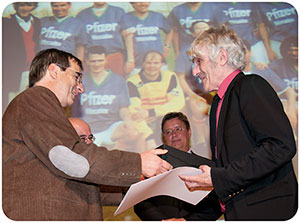 He was originally a clinician in internal medicine, rheumatology and immunopathology, and subsequently head of the lab of immunology. Pierre Youinou is also a member of the scientific committee of the Brest University for 20 years, and Vice-Dean for Research of the Medical School. He has chaired the organizing committee of the "1st Breton Workshop of Autoimmunity", the "4th Breton Workshop of Autoimmunity", the "European Workshop for Rheumatology Research" and the "10th International Symposium on Sjögren's Syndrome". 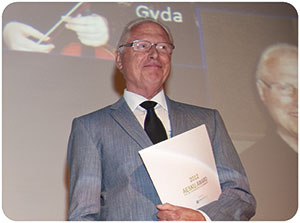 Dr. Allan Wiik graduated as MD in 1964, became a specialist in internal medicine in 1980 and in rheumatology in 1982, all at the University of Copenhagen. He soon became involved in clinical immunology and the immunopathology of inflammatory rheumatic diseases.

He defended his doctoral thesis in 1980 on autoimmunity in rheumatoid arthritis, and since then has worked in the field of systemic inflammatory rheumatic diseases. He held various clinical positions in medicine and rheumatology until 1990, when he became director of a new Department of Autoimmunology at Statens Serum Institute in Copenhagen. The department soon developed into a national centre for autoimmune serology. He retired from this position in January 2006, and subsequently has functioned as scientific adviser to a number of institutes, hospitals, scientific and patient organizations, immunology laboratories and kit manufacturing companies in Europe.

Dr. Wiik’s main interest is in translational medicine and he therefore established the European Autoimmunity Service Initiative in 2000 to ensure better communication between clinicians and diagnostic laboratories. He also introduced the use of practical algorithms in these fields to harmonize diagnostics across Europe. He was the vice-chair of the European Autoantibody Consensus Finding Study Group, and served as vice-chair in the IUIS/CDC International Autoantibody Standardization Committee from 2000-2006.

His main scientific contributions lie within the serodiagnostics of rheumatoid arthritis, systemic autoimmune disorders, and idiopathic vasculitides. His list of publications in international refereed journals and text books exceeds 250 publications.

Being both a clinician and a clinical laboratory specialist he is a popular speaker. In June 2007 he was awarded with the EULAR Award for Meritorious Service to Rheumatology, and in November 2007 he was nominated as Master of the American College of Rheumatology for life-time contribution to rheumatology. 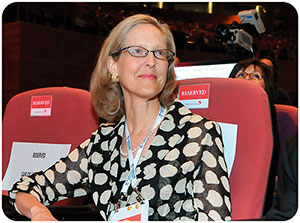 Donna Jackson Nakazawa is an award-winning science journalist and public speaker. In her newest book, The Last Best Cure, she chronicles her year-long journey investigating the groundbreaking neuroscience on how mind-body therapies such as meditation, yoga and acupuncture awaken the healing potential of our brains, change our biology, and revitalize our cells and our health.

Along the way, Nakazawa unveils a little known branch of research showing the clear link between “adverse childhood experiences” and chronic illness in adulthood; a discovery that helped to turn her own life around. She is also the author of The Autoimmune Epidemic, an investigation into the reasons behind today’s rising rates of autoimmune and related diseases.

In The Autoimmune Epidemic, Nakazawa lays out the mounting evidence showing how our modern lifestyles, stress levels, chemical-laden environment and twenty-first century diet have created the ripest possible conditions for today’s autoimmune epidemic to take hold.

She is also the author of Does Anybody Else Look Like Me? A Parent’s Guide to Raising Multiracial Children, as well as a contributor to the Andrew Weil Integrative Medicine Library book, Integrative Gastroenterology.

Ms. Nakazawa has appeared on The Today Show, National Public Radio, and ABC News. Her work has been featured on the cover of Parade, in Time, USA Today Weekend, Parenting, and Psychology Today. She has been a regular contributor to More, and her work has appeared in The Washington Post, Glamour, Ladies Home Journal, and AARP the Magazine.

She is the recipient of numerous awards made to those who have made a lifetime contribution to the field of autoimmune disease, including the 2010 National Health Information Award, recognizing the nation’s best magazine articles in health.

Ms. Nakazawa has received writing–in-residence fellowships from the Corporation of Yaddo and the MacDowell Colony. She received her Bachelor of Arts degree in English and Public Policy from Duke University and is a graduate of the Radcliffe Publishing Procedures Program.

In recognition of those individuals who have dedicated their life to autoimmunity, AESKU created the “AESKU.AWARD for life contribution in autoimmunity”, to say THANK YOU for your work.