For the third consecutive time, the "AESKU.AWARD for Life Contribution to Autoimmunity" was given to three renowned researchers in autoimmunity during the opening ceremony of the 6th International Congress of Autoimmunity in Porto, Portugal.

After awarding famous pioneers in autoimmunity research in 2004 und 2006 the AESKU.AWARD 2008 was presented by Joachim Kalden, Germany and the owner of AESKU.DIAGNOSTICS, Torsten Matthias, to another three renowned experts who dedicated their scientific live to research in autoimmunity in front of 2000 guests, at the opening ceremony. 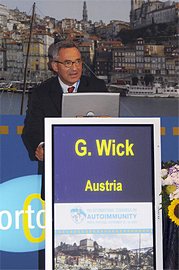 Georg Wick is Professor Emeritus in the Laboratory of Immunopathology at the Medical University of Innsbruck. He is also the former President of the Austrian Science Fund (Wissenschaftsfonds FWF).

After his first career steps at the University of Vienna Medical School and his specialization in internal medicine, Georg Wick spent three years at the Center of Immunology, State University of New York at Buffalo, NY, where he gained a lot of scientific knowledge but also a deep understanding of the importance of basic research in medicine.

In 1975, after another four years at the University of Innsbruck Medical School, he was appointed Professor and Chairman for Pathophysiology and Immunology, where, from 1991 to 2003, he also was Director of the newly founded Institute for Biomedical Aging Research of the Austrian Academy of Sciences in Innsbruck.

His scientific fields of interest are centered on the topics of autoimmunity and autoimmune diseases, immunology of aging with special emphasis on immune-inflammatory processes in atherosclerosis, and the interaction of the immune and endocrine systems. In addition “Good Mentoring” of young scientists is one of his main interests.

Georg Wick is the author of over 500 scientific publications, including eight books. He received a number of national and international awards now including the AESKU.AWARD. 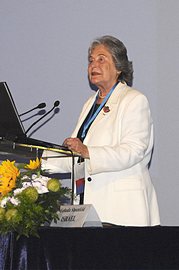 Formerly the Vice-President of the Weizmann Institute of Science (1988-1997), she is a noted immunologist, having joined the Institute in 1960. She served as Head of the Department of Chemical Immunology, Dean of the Faculty of Biology and Director of the Institute's MacArthur Center for Molecular Biology of Tropical Diseases. Currently she is the Paul Ehrlich Professor of Immunology at the Weizmann Institute of Science.

Ruth Arnon has made significant contributions to the fields of vaccine development, cancer research and to the study of parasitic diseases. Along with Prof. Michael Sela, she developed Copaxone(r), a drug for the treatment of multiple sclerosis which is presently marketed worldwide.

Ruth Arnon published about 400 articles, chapters and books in the field of Immunology and Biochemistry. The AESKU.AWARD lines up with a number of renowned prizes including the Robert Koch Prize in Medical Sciences, France's Legion of Honor, the Wolf Prize for Medicine and many others. Ruth Arnon is the Advisor for Science to the President of Israel and the incumbent of the Paul Ehrlich Chair in Immunochemistry. 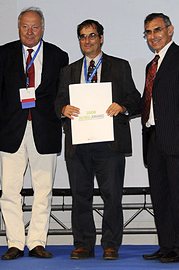 Last but not least the third prize winner, M. Eric Gershwin, a world-renowned authority who dedicated his scientific live to autoimmunity, asthma and allergy, was introduced by Yehuda Shoenfeld, Israel, president of the Congress of Autoimmunity.

More than 30 years ago in 1977 M. Eric Gershwin founded the Allergy and Clinical Immunology Program at UC Davis. His diverse clinical interests include primary biliary cirrhosis and complementary medicine.

He is co-director of the Center for Complementary and Alternative Medicine Research in Asthma and Allergy, and became the first Jack and Donald Chia endowed chair recipient at UC Davis in 1994. Gershwin has worked extensively on behalf of patients with immunologic diseases as American Rheumatism Association board member; American Lupus Society, Sacramento Valley Chapter medical-scientific director; FDA nutrition and immunity advisor; and National Institutes of Health General Medicine Study member. He has written more than 500 scientific articles and 25 clinical books.

He also has conducted immunologic studies of biliary cirrhosis and holds several patents for biliary cirrhosis autoantigens, recombinant cloned antigens, and nonmethylene interrupted fatty acids used as immuno-modulators. In addition Gershwin is a world's expert on the role of environment and health, including such issues as mold, allergens and environmental hazards.

The AESKU.AWARD is one of the highest endowed scientific awards and a unique recognition in the field of autoimmunity research. So far the list of awardees includes famous names like Donato Alarcón-Segovia, Ian R. Mackay und Noel R. Rose, Joachim R. Kalden, Graham R. V. Hughes and Irun R. Cohen together with the experts named above. AESKU.DIAGNOSTICS strives to increase awareness of the importance of research in autoimmunity and the progress in this field.