On 29 November 2006, AESKU.DIAGNOSTICS’ “AESKU.AWARD for life contribution to autoimmunity” was awarded for the second time.

The AESKU.AWARD includes prize money of 30,000 Dollar. This makes it one of the highest endowed scientific awards in medicine, and it is also represents a unique honor in the field of autoimmune research.

One of the leading experts in Autoimmunity, Prof. M. Eric Gershwin, MD, University of California at Davis, US, presented the awards to the prizewinners together with Dr. Torsten Matthias during the opening ceremony of the “5th International Congress on Autoimmunity”, which was held in Sorrento, Italy, from 29 November to 3 December 2006.

In 2006, the AESKU.AWARD was awarded to three renowned researchers, who distinguished themselves by year-long research in autoimmunity: 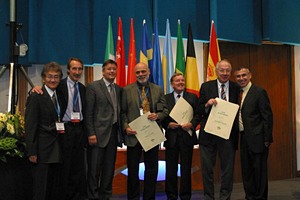 Prof. Dr. Dr. Kalden was presented by Prof. Dr. G. Burmester from Berlin; he talked in his lecture about “Apoptosis in Autoimmune Disease“.

Then the president of the congress, Prof. Yehuda Shoenfeld, MD FRCP, outlined the scientific career of Prof. Graham R. V. Hughes, London, UK, who presented in his lecture “Lupus – A Story of Failure and Success“ the proverbial ups and down of scientific day-to-day work.

One of the goals of the AESKU.AWARD is to stress the importance of research in autoimmune diseases and the progress in this field. AESKU.DIAGNOSTICS also intends with the donation of this award to foster interdisciplinary research and to establish autoimmunity as an independent field of research, as before with the establishment of the first chair of autoimmunity worldwide in 2002 and the continuing commitment for the establishment of the AESKU.KIPP INSTITUTE.

This uncommon synthesis of networked scientific competence and clear orientation to practical issues makes AESKU.DIAGNOSTICS an outstanding enterprise, and it offers the ideal environment for the quick implementation of current research into new diagnostic and therapeutic options.

free Joomla templates
Back to top