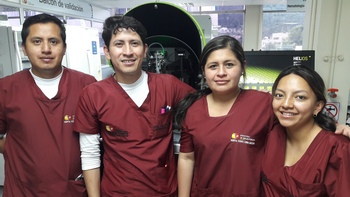 Tuesday April 10th, 2018, was the official start date for the HELIOS system at the Vicente Corral Moscoso Regional Hospital in the city of Cuenca, Ecuador.

This public-sector hospital has been named ‘number one in service’ in its region.

Its clinical lab performs high-complexity routine, emergency and outpatient testing 24 hours a day, 7 days a week while serving as a reference location for a network of six area labs and the Teofilo Davila de Machala, Isidro Ayora de Loja, and Jose Carrasco Arteaga of the IESS – Cuenca Hospitals. Read more...

A public procurement project with a special budget to automate and modernize the Clinical Laboratory service was announced, and several candidate platforms were considered. The selection process took approximately 1.5 years, and the HELIOS was ultimately chosen in autoimmunity for its compact form and complete automation of the autoimmunity screening process.

The autoimmunity testing workflow can be complicated, and the hospital needed a standardized and automated process so results could be offered in a reliable, precise, timely and reproducible way to help doctors to make better clinical decisions, improving their diagnosis and initiating treatment faster and in an adequate way.

With the instrument now in routine use, several national media organizations have covered the outcome of the modernization project and the hospital has been praised for having ‘the best technology in the country.’

“We have become a national reference and we certainly recommend the system to anyone who is interested in immunofluorescence tests for autoimmunity,” said Dr. Oscar Miguel Chango Sigueza.

The Ministry of Public Health of Ecuador launched several reports regarding the HELIOS technology and the quality of substrates of the AESKU brand, and the instrument has been on the front page of several news articles written in the city of Cuenca and nationwide.

The HELIOS also made an impact much more locally: the four technicians who use the HELIOS routinely like its processing and imaging speed; the Rheumatologists and Gastroenterologists in the system especially like having lab reports include images from their patient test results.

Several other instruments have been placed as part of the modernization project, but the HELIOS system has taken the leading role. Now the country has an “excellent spaceship” as its users have called it.

The support of AESKU’s exclusive distributor in Ecuador, Vibag, was fundamental in the success of the implementation, and AESKU is grateful for their partnership.

free template joomla
Back to top