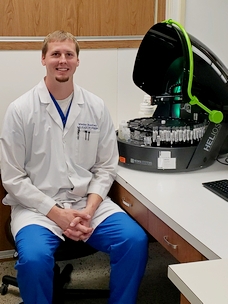 “The main reason we were looking at the HELIOS was our sheer volume,” said Badley. “We couldn’t afford in our facility to sit around and have one full FTE be dedicated to doing manual IFA, ANA; it just wasn’t feasible. Also, just finding qualified technicians is a very hard thing to do in our area. Having people there that can read ANAs and read those patterns was hard.” Read more...

He evaluated many options, including going away from the gold standard screening method: “Should we just scrap doing IFA and go to ELISA, or should we continue to do what we feel is the right thing even though it seems a little bit harder?” The decision was made to pursue complete IFA automation, and the HELIOS stood out to Badley as the only all-in-one processor/reader. “All the other options were, okay we could do this step for you but then you’re then going to have to step in […] or you can do this step and then you will have to move it to another instrument to do the following steps. HELIOS was the only one on the market at that time that we felt could do everything for us,” Badley concluded.

“[Implementation] was a pretty simple process for us, Grifols and Aesku provided a lot of support. We would just run our normal runs on our manuals […] and run those again on the HELIOS, so instead of just one set a day, we’d run one manual and one automated － and the correlations were within the 90th percentile.”

“We’ve had the HELIOS coming up on 1 year. We were sitting down with that one FTE to do ANAs, IFAs every day of the week, 5 days of the week. Our volume has continued to increase but [with the HELIOS] we went to a Monday, Wednesday, Friday testing schedule,” said Badley. “[Our techs] load the HELIOS and […] we don’t have any issues so we just let it run, we don’t have to baby sit it, we don’t have to worry about it. […] It totally frees that tech up. The tech can go and do other things for at least 2 hours while it’s running and that, I mean, it has drastically impacted us.”

“The HELIOS has been, to me, way beyond what we expected. […] You hear about technology that’s advancing but hearing about it and actually seeing it do what has been promised are two different things, so the HELIOS, to us, was a dream,” Badley concluded.

Special thanks to Supervisor Badley for granting the interview this article was excerpted from and to SSM Health for choosing the HELIOS for complete IFA automation.

free template joomla
Back to top
×
Did you know?